Come on out to the Telemark Nordic Centre on Family Day for  some family fun in the snow. The ski and snowshoe conditions are the best they have been all year and the weather is warm and beautiful.

Telemark is offering free trail passes and rentals for all kids (18-under) on  Monday Feb 17th in celebration of Family day. 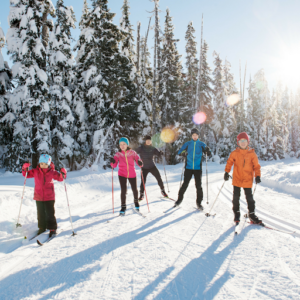 The Mary Irwin Theatre at the Rotary Centre for the Arts in Kelowna was packed to the rafters with local athletes, coaches and parents…brothers and sisters in Sport for an evening of award presentations, funny anecdotes,  inspirational speakers and an introduction of Athletes attending the BC Winter Games.  Telemark was well represented at the Gala.  Our Team Telemark Biathlon delegation brought along their loud cheers and even cow bells to ring in the award recipients, two of whom were Telemark Club members. Telemark was also well represented at the BC Winter Games athlete announcement.

The BC Winter Games… will kick off in Fort St John from Feb 20-23. The Okanagan (Zone 2) athletes were called up on the stage for a presentation.   Telemark athletes were represented on stage by 13 year old Evan Edwards. Telemark qualified the largest number of athletes ever from our Club. Athletes from Telemark Nordic Club who will be competing at the BC Winter Games are:

The Telemark Nordic Club would like to welcome Integrated Power Systems (IPS for short) as a new Club sponsor. Lars Jensen and Sonia Sorensen of IPS are avid cross-country skiers and Telemark Nordic Club members.  They thought this sponsorship support would be a great way to become more involved with the Club.  You may have noticed their logo on our Trail Conditions webpage. Try clicking the IPS link the next time you see it to learn more about them.

Integrated Power Systems has been specializing in Solar Grid-Tie, Off Grid Solar and Back-up Power Systems in Western Canada since 1993.  Whether you are looking to save money by reducing your utility bills, increase the value of your home or property or provide power to a remote location IPS has the equipment and services you need at affordable prices. If you are looking for a solar or alternative energy system please call IPS.

Fresh snow,  perfect temperatures and BBQ hot dogs. It doesn’t get any better!

Join us for a great day of XC skiing and snowshoeing at Telemark and bring your appetite for our Race Team BBQ Fundraiser – Hot dog and a juice for only $5 starting at 11:30am and going until the hot dogs are gone.

We will be hosting a BBQ each Saturday in February.

Please join us for Thursday evenings filled with friends, fun and cross-country skiing followed by an aprés-ski BYO social in the Telemark lodge – Meet at 6:00pm  every Thursday.  Feel free to bring classic or skate skis, guests, a sense of adventure and snacks for afterwards! Hope to see you  there! 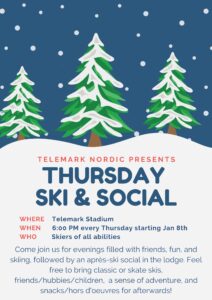 “Loppet”is a Swedish word that means citizens ski event….a competition for everyone no matter what your level.

“Never done a Loppet before? Come join the fun.  The full Loppet is a Skiathlon (both Classic and Skate) but we also have shorter courses and a recreational category in classic technique just for you.  It is a 7.5 km course on Telemark and Rabbit.  If you can ski the full Telemark trail, the recreational race course will be a piece of cake for you.”  Great food, prizes and lots of fun!  Registration is open until 11:59pm Jan 10th. for more infor please go to our “Calendar of Events” Webpage

For those of you who are not doing the Apple Loppet, Telemark is open to the public.  Please be aware that there will be some restrictions on some trails during the event.  Loppet time is 10am to 1pm.

The Telemark Nordic Club would like to  welcome Red Moose Immigration Services as a Club sponsor.

Nicole and Robert Kleemaier of Red Moose Immigration Services in Kelowna are avid cross-country skiers and  have been long time, active Telemark members.  They wanted to give something back to the Club and so have become our newest sponsor.  You may have seen their banner at the lodge as the backdrop for our season pass photos this year.  You will definitely see Nicole and Robert around the trails in their distinctive Red Moose outfits.

Red Moose supports foreign nationals in their efforts to get a visitor visa, study permit, work permit or permanent resident permit. They also help employers who want to hire those individuals. If you need these kinds of services please think of Nicole and Robert and Red Moose Immigration Services. 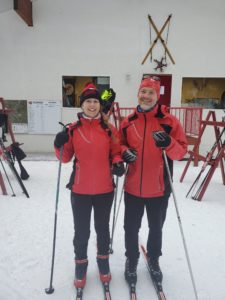 It’s going to be a great day and a busy day at Telemark on Saturday January 4th.

Join us for the annual Fresh Air Experience Nordic Demo Day!  Try out the latest & greatest cross-country ski gear from Madshus, Rossignol, Fischer, Salomon, Swix and more. 10am to 2pm.

Also Saturday is the start of the main season for the Telemark Ski League kids program.  150 kids in ski programs along with their parents will be at Telemark from 10am to 1pm.   We are looking forward to having the kids all here for another fantastic season.  If you want to avoid the crowds plan your skiing day accordingly. 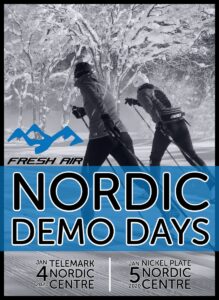