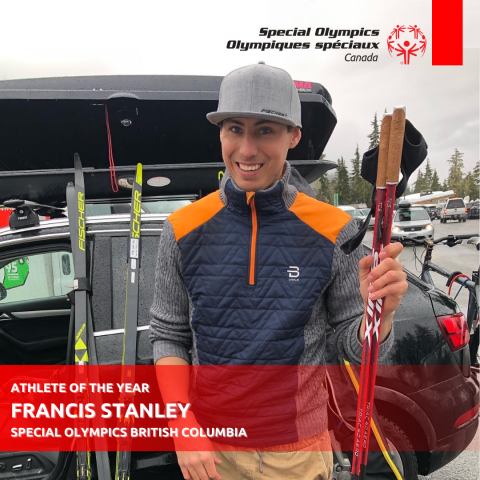 The Special Olympics Canada National Awards annually recognize the outstanding athletes, coaches, and volunteers from across the country who exemplify the spirit and essence of the SO movement.

Stanley is very appreciative to those who helped him in his athletic and personal journey.

“I would like to thank my coaches Garth, Ray, Les, Adam, and my mom Annabel who helped me choose a healthy lifestyle and to be a mentor to other skiers,” he said in his acceptance speech.

Stanley has been part of Special Olympics for 13 incredible years. His athletic achievements include multiple gold medals in cross country skiing at both the national and international levels, as well as earning a spot on Special Olympics Team Canada 2022. For many years Francis was integrated fully into the Telemark Competitive program to help him achieve his success.

As a multi-sport athlete competing in athletics, cross country skiing, and soccer, Stanley understands the importance of being a team player and having a positive attitude. His coaches, friends, and family members marvel at how determined he is in reaching his goals, as well as encouraging his teammates to do the same.

Francis was also the recipient of the 2022 SOBC Athletic Achievement Award, one of the six annual awards that recognizes the inspiring athletes, volunteers, and sponsors of the SOBC community. Congratulations to this year’s award winners! Learn more by clicking here.