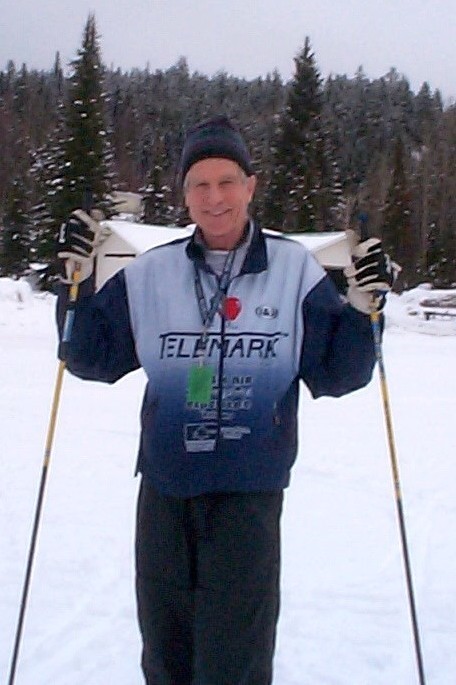 We were all saddened to hear that Clive passed away unexpectedly on December 7.

Clive was a very active member of Telemark. For a number of years, he was involved in the Loppet races, organizing some of them, while many will remember him being on the starting line. Clive also was a very effective fund raiser. It started in the mid eighties with running the bingo events which eventually evolved into casino nights and then gaming grants from the Provincial Government. The funds Clive raised have given a financial boost to the many youth programs at Telemark.

As a retired teacher, Clive felt that a ski program for school aged children would be of great benefit and he was instrumental in getting this program started in the late nineties. It has been very successful and last year more than 2000 school children spent time at Telemark. He was president from 2000-2004 and during this time the washrooms were completed, the biathlon program was started and Telemark hosted a very successful NorAm race. He was a master at recruiting people for various jobs and would not take “no” for an answer. After his years as president Clive continued on the Board of Directors until 2017. We are grateful for the enduring legacy that Clive has created for the community of Telemark Nordic.

Besides being active in Telemark, Clive contributed in many other ways to the community: he was involved in swimming programs, the Okanagan Rugby Referee Association, the Lakeview Heights Community Association and the Friends of Kalamoir Park with the annual pancake breakfast fund raisers.

Clive had a wonderful, sunny personality.  He was easy going, but at the same time determined to achieve the things he believed in. He was a real gentleman. Many of us have very fond memories of Clive.

He will be missed by many, but especially by Brenda and family. Our thoughts are with them.

Written and submitted by Emile Brokx – Telemark Nordic Club Compatriot and long time friend of Clive’s on behalf of the Telemark Board of Directors and all Club members.